GO as a language provides a build in formatter for the code: gofmt. The project uses the predefined format as implemented in gofmt. That means tabs and not spaces etc. Read the Effective GO page for further details. Before creating a pull request make sure the code at least is formatted using gofmt.

Beside the effective GO guide follow the recommendations from the CodeReviewComments wiki page. The wiki provides a good collection of comments from code reviews. Most of the comments will be checked in the automated checks described below.

When using an IDE, like GoLand or Visual Studio Code, use the builtin options. Most IDEs will provide an extensive list of checks or formatting options that help formatting and point out code issues. See IDE setup for a basic setup for the GoLand IDE.

Not all code will be written using an IDE. Even between contributors the settings might not be the same in all installs. To help keep code formatted consistently a lint tool is part of the code approval.

There are a large number of lint tools are available for Go. Most of the lint tools only check one specific thing. Some of the tools will aggregate a number of linters and provide an overview of all the issues found. For the project we have chosen the golangci-lint tool. The tool can be run locally and will be integrated into the GitHub PR flow.

Depending on your development system the instructions might differ slightly. Follow the installation instructions provided by the project.

After the tool is installed you can run it using the standard command line:

The projects still generate a number of warnings. The high impact warnings have been fixed or ignored via comments, see False positives.

The make target is lint:

The make integration checks two locations for the linter executable:

The location for a standard installation is slightly different for a developer and CI install. By checking both locations we can run locally and during our automated builds.

The make integration uses the --new-from-rev command line option. The revision to check against is determined as part of the run to allow it to run on different branches and on pull requests during our CI build. A lint check is part of the standard CI build run for the project.

See the golangci-lint product documentation for more options and information on how to run the tool.

A predefined configuration is provided for the two projects that use them:

The web interface is a javascript project and the scheduler interface only has generated Go code and thus do not use it.

The planning is to integrate the golangci-lint check into the GitHub PR flow.

Tools are never 100% correct and neither is this one. Certain issue are too hard to correct or are not important enough to fix.

Using the nolint comment without a specific linter is discouraged.

GoLand has a number of checks turned on by default. These defaults already provide a good coverage and mark a lot of issues found by the linters as issues. To extend the coverage further and help mark issues proactively check the following settings and change them to the settings as per the screenshots.

Open the preferences pane and go to: Editor -> Code Style -> Go. There are three tabs to configure, the first two are crucial to comply with the basic rules from gofmt and goimports:

The imports as configured above should create 3 groups of imports in a file when they are used:

In the file it will give you an import that looks like this:

The default inspections can be used except for one that helps highlight shadowing variables. Shadowing can cause difficult to trace and obscure bugs in the code and should be prevented whenever possible. 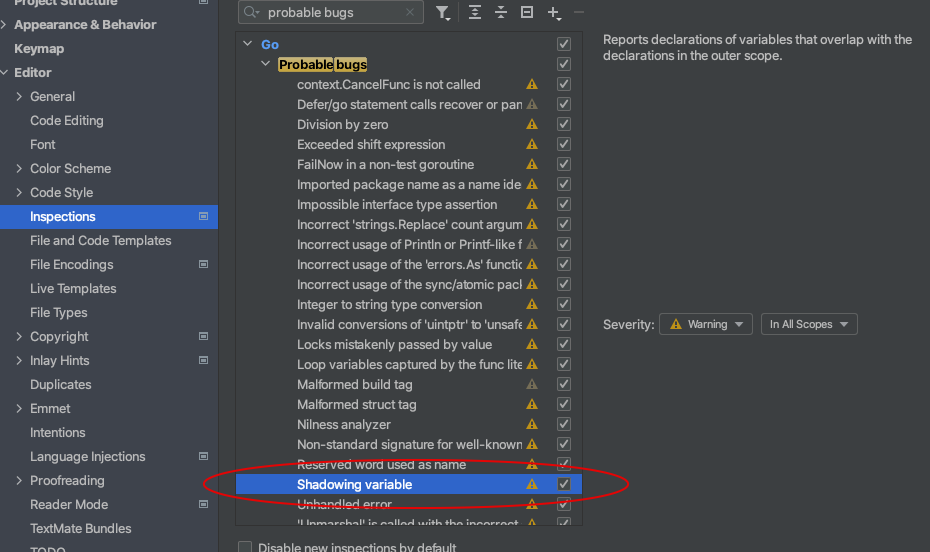